It has been a while since I posted - yeah, been busy with medical school and all that.  Still keeping my eye out for new insects, and since we are in the middle of moving to a new apartment, we are going to go through our collection and tidy it up a bit.  Several new additions and insects that need to be keyed, but here are the more interesting of the lot.

I'm essentially positive this fellow is a Neuropteran, but whether he is a giant lacewing or an antlion is yet to be decided.  We already packed our Borror and Delong key to insects of North America, so it will have to wait until after the move to be classified.  Here is the picture as a teaser - if anyone wants to venture a guess or identify it for us in the meantime, you are more than welcome!

On another note, this one is out of our range for keying - it was brought back by a friend who visited the Peruvian rainforest.  I was thrown off by the fact that the scutellum (seen in order Hemiptera, usually a small plate directly beneath the thorax) is maximally enlarged and both sets of wings are hidden beneath it.  This is characteristic of its family - named Scutelleridae because of it's elongated scutellum - to the point where it starts to closely resemble a beetle (Coleoptera). 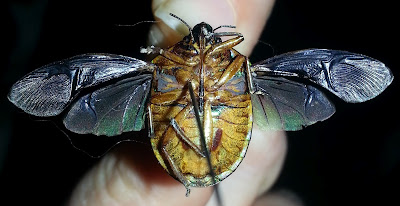 These were some of the better pictures - somehow the surface of the insect became really sticky, not sure exactly what happened there - it also became more luminous.  Upon looking up other members of Scutelleridae in North America, I must say this one from Peru is far larger and has more impressive colorations.  I'm glad it will be our first representative of this family.  There are 37 species in North America, and 450 species worldwide - many in South America and known as jewel or shield bugs.
Posted by escabatum_rip3 at 7:31 PM No comments:

It has been almost a year since my last post it would seem, but I have made a lot of progress on the insect collection, believe it or not - I actually went to Virginia and got a lot of very nice butterflies, moths, dragonflies, and cicadas - enough to actually make a couple insect display boxes - not just collections. As it is summer again and I may have more time to collect, among my medical student duties, and my fellow insect-collector is now living with me and not in San Diego anymore, it seemed time to introduce one of my more recent specimens... 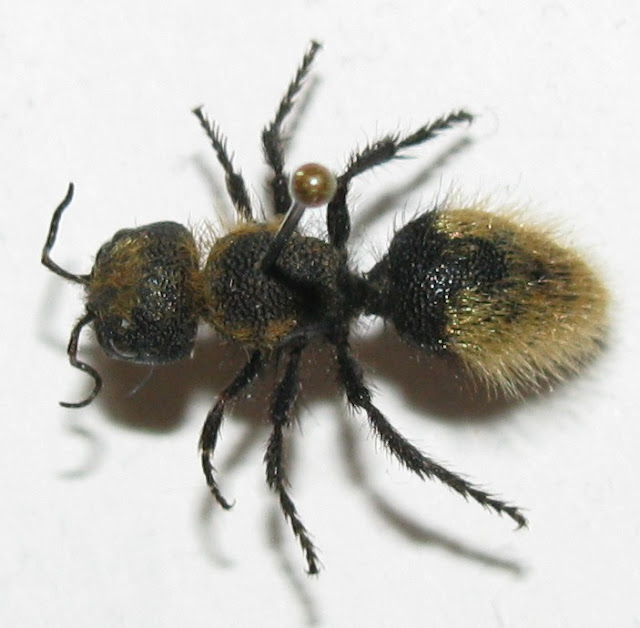 Hymenoptera; Aculeata; Vespidoidea; Mutillidae; Dasymutilla (aureola?)
Common Name: Velvet Ant, Cow Killer
The name 'Cow Killer' is an obvious misnomer - while these velvet "ants" (they are actually wasps) can inflict a rather painful sting, they do not kill cattle. When I collected this specimen in the East Bay Area (Sonoma County), I didn't have a collection jar and so I tried to keep it in my sock while I brought it back to the car, and it did manage to sting me even through the sock. Didn't get a welt but it did hurt. Anyhow, these wasps are active during the summer in dry, open habitats. The females are seen crawling on the grounds, often mistaken for large furry ants, and the winged males (which do not sting) fertilize eggs lain by the females. Dasymutilla is a very big genus, with species' colors including red, orange, yellow and white. There is another species of Dasymutilla which looks similar and lives nearby (Dasymutilla coccineohirta) but according to online experts, Dasymutilla aureola's head is wider than the thorax, contrasted to Dasymutilla coccineohirta which has a smaller head. Also, the specimen above probably lost a lot of its hairs in my sock, so it is not the best example of it's species. Hopefully I will be able to look for more insects in the near future and find another one of these fuzzy little guys.
Here are my 'mounted collection' insects - half of the butterflies and moths I caught in Virginia, the Cicadas/Damselflies were caught in Virginia, and all the rest were in California. 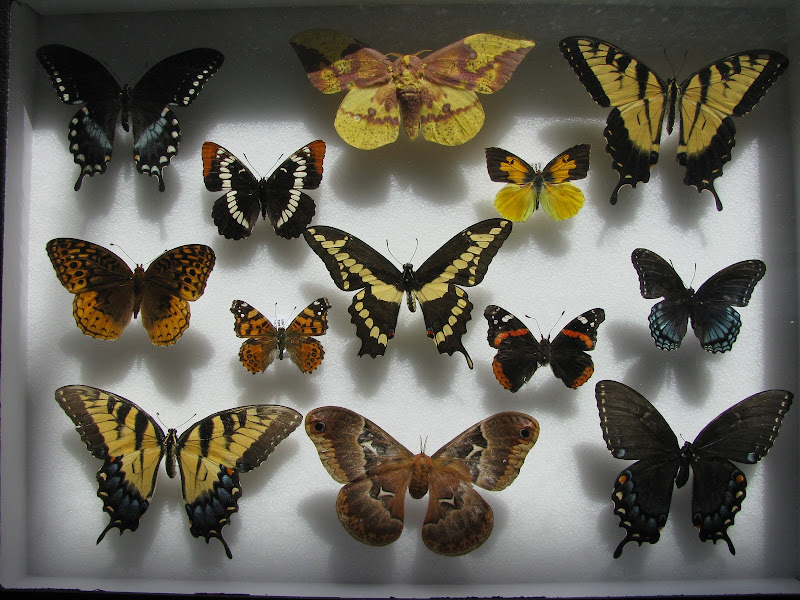 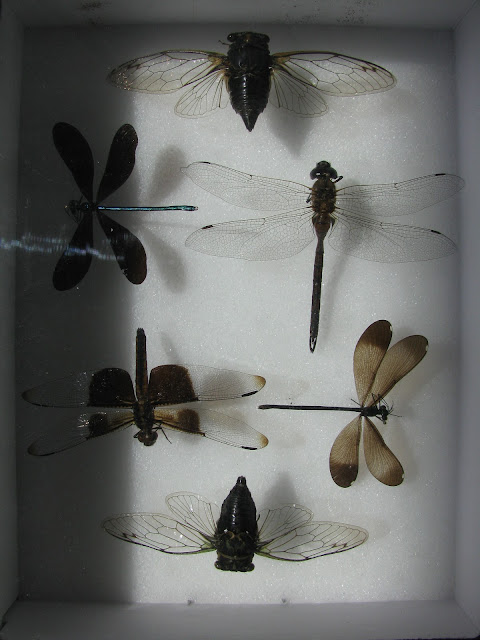 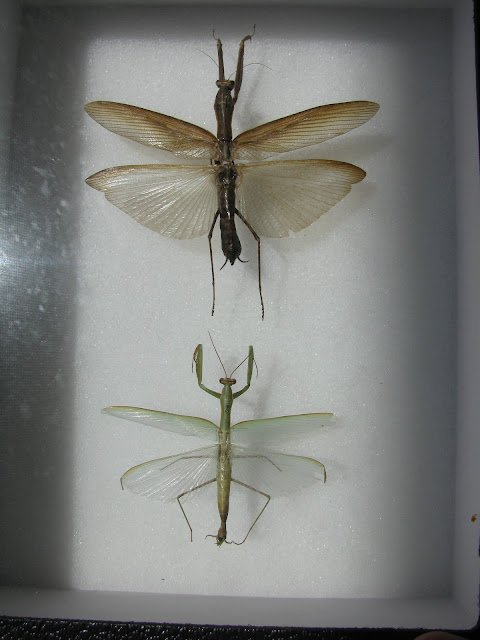 Posted by escabatum_rip3 at 6:26 PM No comments:

This specimen is the largest, best preserved butterfly I have managed to pin - they are difficult to preserve well because at each step along the way, catching-killing-pinning, there are endless ways to lose scales. Papilionidae is a family containing the subfamilies Parnassiinae and Papilioninae. Papilioninae is characterized by having one or more tail-like prolongations on the rear side of the hind wing (hence the name - swallow tails). Also, the radius in the fore wing is five branched. They tend to be black and yellow, some with striped patterns (zebra swallowtails) and some have red and blue markings as well. This subfamily is generally regarded as being one of the largest and most beautifully colored North American butterflies. The males and females tend to have different colorations, and this subfamily contains the largest butterflies in the world (the giant birdwings of Asia and Australia may reach wingspreads of 255 mm).

Lepidoptera; Papilionoidea; Papilionidae; Papilioninae; Papilio cresphontes
Common Name: Giant Swallowtail, Orangedog
The larvae are smooth-bodied, often have eye spots, and have an eversible scent gland or osmeterium - when the larva is disturbed, it emits a disagreeable odor. The larva forms a chrysalis, and it overwinters in that form, emerging as an adult in the spring. The above species, Papilio cresphontes, is a large, dark-colored butterfly whose larvae feed on citrus in the South and on prickly ash in the North. This specimen was found in San Diego, and is a female - the males have bolder reds and blues on the underside of the hind wings, with a black border. You can see from my hand that the butterfly is pretty large - roughly 4 inches across from wingtip to wingtip.
Posted by escabatum_rip3 at 9:38 PM No comments:

I guess posting that Persephone was gone gave me good luck in finding a new spider - I came across a little crab spider in my backyard - it looks kinda like a Northern Crab Spider (Misumenops asperatus) but that's just a cursory field guide estimate. It is still the same family, Thomisidae, and it has pinkish colorations on a white background. It's a bit smaller than the other one, but it might be a very young crab spider, so hopefully I will be able to see it change as it grows. Anyway, here are the pictures - the name is Rosie. I don't know if it is male or female - it seems the biggest determinant is size, with females being larger, so if it grows a bit more that should suggest it is a female.

I'll post some pictures of her feeding eventually - just letting her get used to her new habitat for now. Her first meal of the day was a little fly, once she's done I have another one ready for her.

Posted by escabatum_rip3 at 5:54 PM No comments:

Well, I have been avoiding admitting the obvious for a bit now, but it looks like Persephone is no more.

Not a day or two after my last post about her, when she was so happy and getting colorful, I went to San Diego for the weekend. Sometime while I was away, my cat got up on my bookshelf where Persephone was, knocked over the jar, and either Persephone escaped to some nether region of the house or was ... well, eaten. I had been hoping she would reappear, but it appears that she is long gone.

In the meantime, I am keeping my eye out for another crab spider, or possibly a green lynx spider - they're easier to manage since they don't spin webs. So if I need to clean out the jar then it's easier. At any rate, hopefully I'll find a new spider pet soon.
Posted by escabatum_rip3 at 1:39 AM No comments:

Persephone - a little over a month

I have had Persephone for a little over a month now - she is still thriving. She's quite feisty too - she managed to survive a cat knocking the jar over - luckily she took cover under a nearby shoe so I was able to find her rather quickly. Her favorite food is still honeybees, but since it's been so rainy and cold lately, the bees hadn't been out and I had to catch her the occasional fly, which she would drain in about 10 minutes. The other day the bees were back so I caught her one and, once again, she worked on it for a few hours. I even saw her rotating it around to try to get every last drop out. She has also developed some maroon side spots, and her front half seems to have a more greenish hue to it - hopefully she will continue to become more colorful!

After feeding
Posted by escabatum_rip3 at 3:19 PM No comments:

Persephone did not seem too fond of the fly, so I gave her a honeybee today, which she quite readily snapped up and has been devouring for over 16 hours. I took some photos, in which you can see how much her abdomen has engorged, indicating how hungry she was before she came under my care. Other than that, no notable changes. It is winter here in California, so despite insect forays I have not come up with many interesting specimens. 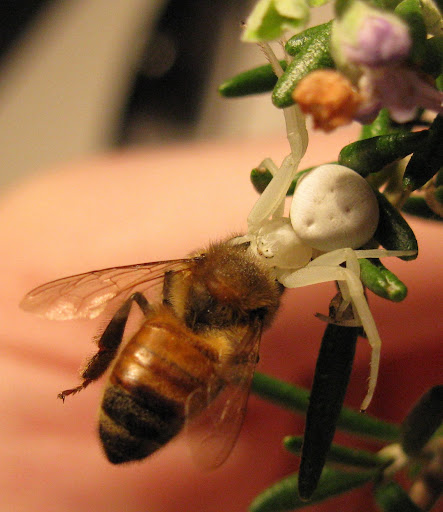 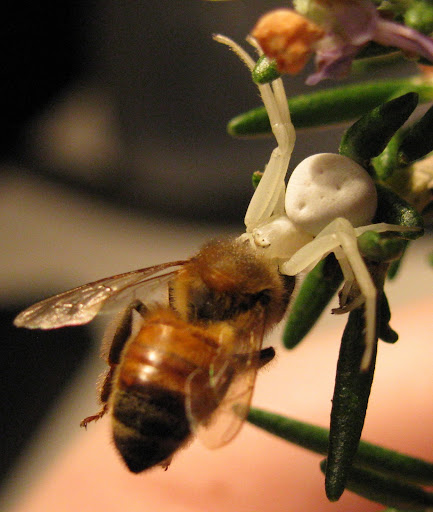 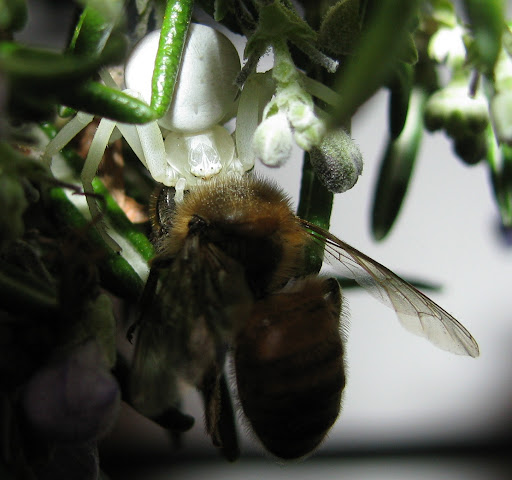 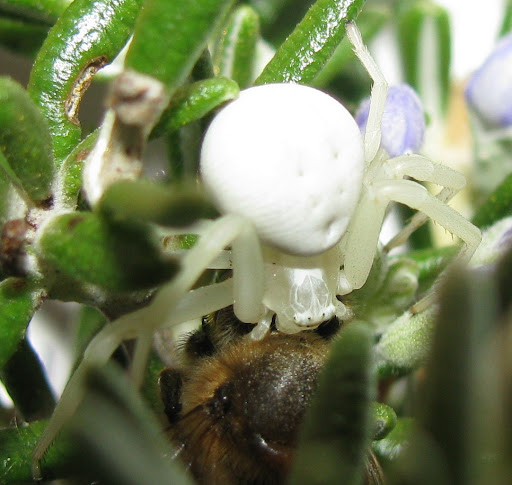 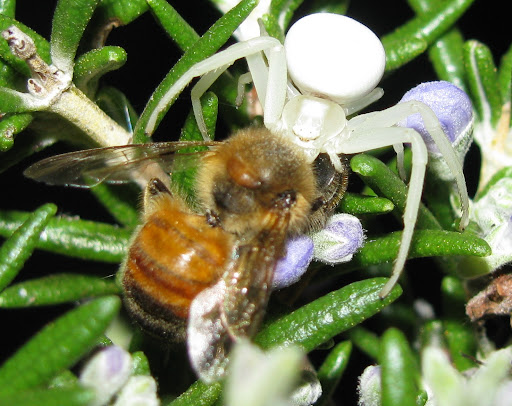 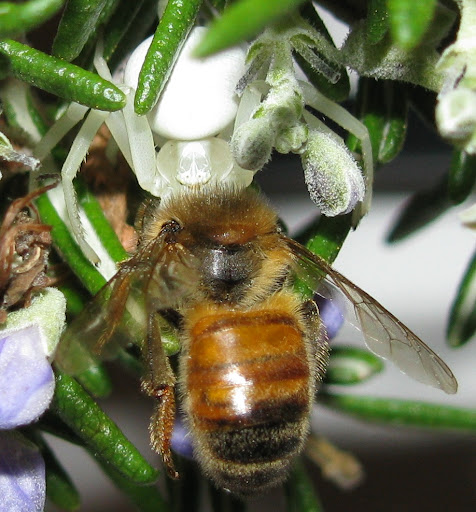 Also, here is some information from my field guide about Goldenrod Crab Spiders - Females tend to be yellowish-white with crimson streaks on each side of the abdomen, and a reddish-brown stain between the eyes. The female's legs tend to be pale, they inhabit meadows, fields, and gardens on daisies, goldenrod, and other white or yellow flowers. They are found throughout North America and Canada. They prey on flower-visiting insects, hence why she didn't like the fly very much. They administer a bite that injects fast-acting venom, and they can capture insects much larger than themselves. The females protect an egg sac for a time, but the female usually dies before the spiders hatch (usually 3 weeks after being laid).
Posted by escabatum_rip3 at 7:06 PM 1 comment: